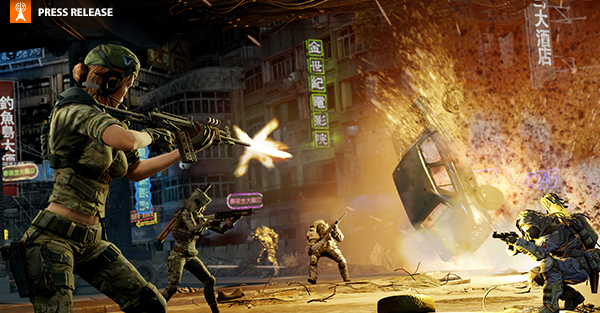 Crytek have announced that their free-to-play shooter Warface will enter an exciting new "Sneak Peek" phase tomorrow. For a chance to join the action players can still register at www.warface.com.

Players will have a wealth of new content to explore when the game update takes place, including new locations, game modes and rewards. The Sneak Peek phase will introduce a spectacular new Chinese setting that takes the fight against Blackwood forces to the Far East. Players will also be able to suit up as female soldiers for the first time, as well as trying their hand at the brand new Destruction mode – a fresh take on classic capture and hold gameplay. Further updates mean Warface will now offer five daily Coop missions instead of three, and allow players to earn greater rewards by setting pre-game challenges. Finally, a new tutorial system will be introduced so that everyone might be able to prepare for battle by undertaking short, class-specific training missions.

Before entering the Sneak Peek phase, character data built up during recent Closed Beta weekends will be wiped for the final time. The Sneak Peek phase will be open to everyone who is part of any Warface Closed Beta phase, and will be followed next week by the arrival of a Pre-Open Beta phase which remains restricted to invited players. Sometime during this Pre-Open Beta phase, the Warface in-game shop will be made accessible.

Crytek are also in the process of finalizing localized versions of Warface in French, German and Turkish for its full launch in Western territories, where the game will be accessed through the game-centric social hub, GFACE. GFACE gives players easy ways to interact with friends online and in-game, and is designed from the ground up to maximize the experience of playing together.

Featuring four distinct character classes and engaging cooperative and competitive gameplay, Warface provides high quality FPS action for free. The game’s online universe will be constantly updated to offer new challenges for players; whether they’re enjoying a quick campaign in their lunch hour or delving deeper into all Warface has to offer.