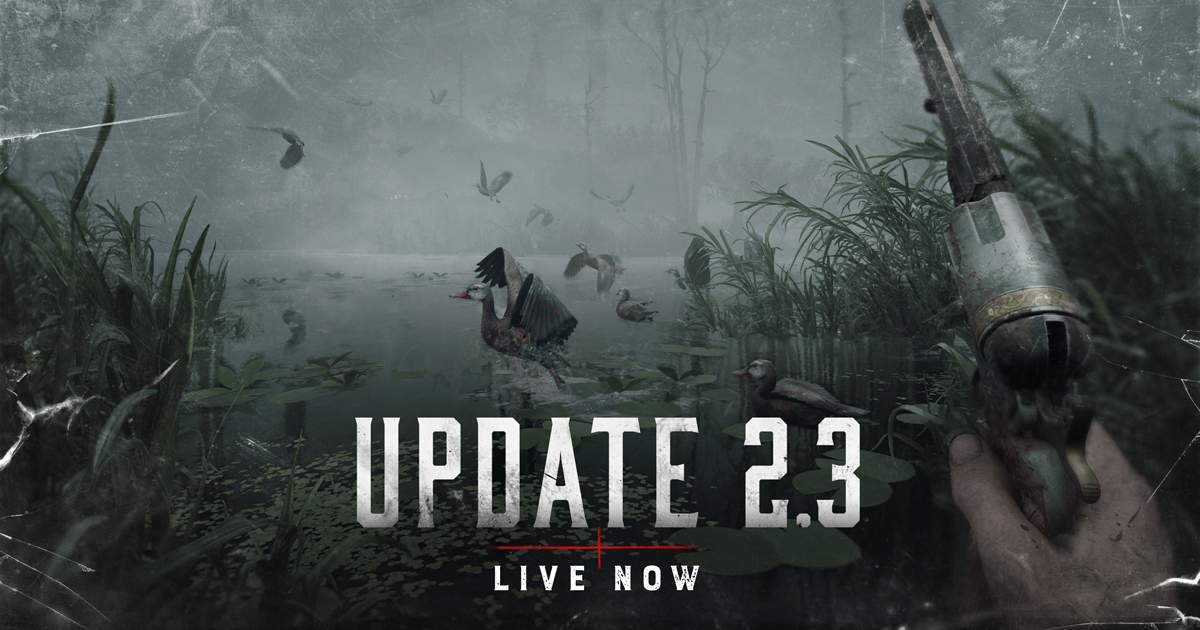 Added a new AI - "Water Devil" to the swamps
The Water Devil will predominantly infest parts of the Louisiana Bayou swamps and will react to Hunters entering the water nearby
Hunters can try to outrun, distract or kill the Water Devils, but don’t get caught up in deep water as this can bring a swift death. Tread carefully.
It is possible to defeat individual swarms of Water Devils, but eventually a new swarm will take its place in the area; use the moment wisely.

Developer Notes:The Water Devil see’s the introduction of the first new AI since we launched Early Access in February. Our hope is that this AI adds a new level of tension to the swamps while traversing through the waters. We are intentionally keeping the number of Water Devil spawns low, resisting the temptation to add them around every corner (we want the water to be slightly more challenging now, not impossible). This means that you will still be able to traverse the water areas as before, using them to attack compounds from unexpected angles, bypass groups of enemies on land, or to make that quick escape to the extraction points to get the bounty to safety. However, we also want players to never again fully trust the calm waters, giving a healthy feeling of paranoia. There might be something lucking beneath the water so take a moment to check before diving in.

Your feedback on this new addition is very important to us so please let us know about the experiences you have when encountering them. Do you completely avoid the water now? Are there too many or too few? Do you feel they are a good addition to the game? What would you change?
Be sure to let us know on the Test server forums on steam, in discord and on our social media channels.

Bosses will now converge on players that attempt to hide inside the arenas (that corner you thought was safe… won’t be safe anymore).
We have tuned the behavior of the bosses when players are near the arena. This will mean that their movement will be harder to predict ensuring they are less exposed to high damage opening attacks.
The Butcher will now always have his fire throwing ability from the start to better deal with players outside of his reach.
Grunts with torches will now inflict some minor physical damage in addition to setting the Hunter on fire.

Audio pass made to the AI cast to improve audio over distances. It should now be easier to determine how far away the AI is from your location
Improvements made to the Hellhound audio. Snapping sound radius has been reduced as this was misleading and giving the impression they were closer than they were.
Based on community feedback, we have reduced the volume of the audio produced on the accolades screen
Further tweaks and adjustments made to audio occlusion to minimize the edge cases where it is possible to hear through the terrain

Change to the listening port for client connection to the backend from TCP 11000 to 61088.

Developer note: We are experimenting with a new port to evaluate if this resolve some issues certain users have been experiencing with the connection to the backend dropping at random times. If we do not see a positive change with this on the Test Server, it will be reverted for the deployment to the Live servers. If you had to white list ports in your router, please also white-list port TCP 61088.

Added new "Waxed Dynamite Stick" consumable that detonates in water with a slightly reduced radius but more power.
Added the "Liquid Fire Bomb" consumable that will explode on contact with the water and burn for a few seconds.
Initiating the reload process will no longer cause your hunter to stop sprinting.
The Poison Bomb’s toxic cloud lifetime has been increased to 120 seconds.
The insect swarms from the Hive bomb will now linger for up to 30 seconds before they disperse if they do not find a suitable target.
Increased the damage of the weak and exhausted melee attacks with the Sledgehammers to be more in line with the Wood Axe.
Weak melee damage has been slightly reduced on all handcannons to be more in line with pistols that have an attached buttstock.
Romero 77, Romero 77 Talon, Specter 1882 and the Auto 5 now have a reduced crosshair spread giving them slight more accuracy at range.

Developer note: Shotguns are now grouped into 3 categories (Long barrel, medium barrel and short barrel) with the accuracy of the weapon now being dependant on the barrel length. The longer the barrel, the better the accuracy giving them more reach over their smaller cousins. This change is intended to boost the early game Romero 77 shotguns as well as the base Specter 1882, and Auto-5 Shotguns, making them feel more reliable to use over distance compared to the Caldwell Rival 78, Specter 1882 Bayonet. The medium barrel and handcannon (short barrel) remain unchanged.

Hunters can now vault through windows that contain breakable glass.
Changes to Burning
Holding “F” to stop burning will pause the burning process during the duration of the action (releasing the key will cause the effect to continue)
Standing in fire while holding “F” will not pause the process and you will continue to lose health chunks from burning
The fire effect will only remain visible on a downed hunter while their health chunks are burning away (no fire on a body means the hunter is fully dead and cannot be revived)
Downed hunters health chunks will now burn at a slower rate, giving the teammate more time to revive them
Hunters now need to walk a few meters in the water before the splashes will put out the fire.

Developer Notes:
This update sees some big changes to the fire and rending damage, making them less punishing as well as removing some frustration that has been experienced in these situations. Here is an example; you are shot and start to bleed, now even at 1 health point, you can avoid certain death by pressing the “F” key in time to stop the bleeding damage, or save that health chunk from fully burning away. Downed Hunters are also most likely to outlive a lantern or fire bomb thrown on their body as we have increased the time it takes to burn away all of the health chunks. We hope that this combination of smaller changes will make suffering from secondary damage effects easier to combat and recover from.

Bounty, XP and Dollars are now displayed separately for the "Top 5" Accolades and all "Other" Accolades that can only be seen in the details view.
The "Other" category includes all additional money found from looted bodies or received as Bloodline rank-up rewards.
Total score for Bounty, XP and Dollars from both the Top 5 accolades and from other rewards is displayed in a separate line.
Total Dollars earned will be the main indicator of success for completing a contract and are displayed much bigger now.
Added a conversion rate legend for Bounty into both XP and Dollars for better transparency of the received score (1 Bounty = 4 XP + 1 $)

Added a new repeating, infinite rank. Players at rank 100 can gain for some additional money.
Players will not increase in rank (100 is still the max), but earned XP will still advance their Bloodline progress as normal.
For every 4000 XP added to the Bloodline, you will receive a reward of $666.

Adjusted a number of stats for weapons and equipment in the Arsenal and Shop menu.
None of these stat changes have an effect on gameplay. They are abstract and purely displayed for the purpose of weapon stat comparison.

Rank Badges have been added as a reward for progression your Bloodline and ranking up.
Players' Rank Badges will update every time they unlock a new Tier on the Bloodline.
In addition, Rank Badges upgrade every time the player goes Prestige.
The first ten Prestige levels each have a unique design, after that the badge updates every ten Prestige levels up to the max level 50!
We added some new artwork to the loading screens. We hope you like the new additions.
Added the Dark Sight Boost time display to the spectator mode UI.
Updated the news banner.
Added a confirmation button for leaving the match when with a partner. This will help to avoid instances where you may accidentally click on the “Leave match” button after being downed.
This will only appear if you are in a team (solo play remains unchanged in this regard)

Ducks added as a new animal attractor:
Similar to the crows, but only found in water.
Reduced the chances of crows appearing on land to ensure balance between the two attractors.
Reworked the entrances to the boss arena at Chapel of Madonna Noire to prevent camping the boss pit.
Improvements made to the spawn rules for bear traps to ensure enough defensive tools are available around the banishing site.
Reduced the spawn rate of bear traps overall throughout the map.

The iron devastator trait description has been updated with the correct information. Previously it was referencing all shotguns rather than only pump-action shotguns.
Crows no longer fly away with the sticky bomb or chaos bomb attached
Fixed the leave session button on the contract screen
Fixed an issue that could cause a new account to be unable to press “back” after pressing play from the Library screen

AI may become stuck when navigating around certain areas.
Hunter heads may snap back and forth if too close to other entities or pieces of geometry.
Hive swarms are able to attack players through solid walls and small lattices.
Oil pools are invisible.
Shadows may not blend together correctly on low end systems.
In rare instances, players may become stuck on the matchmaking screen at the “Loading Map” stage.
In rare instances, players may encounter a freeze on the “waiting for other players” screen.
The progress of the endless Bloodline XP loop is currently not reflected on the bloodline screen (the details can be seen on the accolades screen after each match)
Freezing/stalls – Don’t worry, we have not forgotten about this! We are still investigating the causes of the freezing/stalling that has been occurring for some of you as our highest priority.
Some lines are not localized (showing as @____)