Welcome to the “Crysis Monthly Update #10", the monthly report for our world-wide community. This time around we've got information on some of the awards Crysis Warhead picked up over the last month, we've got info on Crytek UK along with the upcoming release of Crysis Maximum Edition and an old community member becomes an official Crytek Community Representative. All this any more!

Content: Crysis Monthly Update – January 2009
Crysis Warhead Wins more awards!
Crytek has picked up yet more awards this time in the form of VE3D and VES awards. Check out the information on them below.

Free Radical becomes Crytek UK
We're really pleased to announce that Free Radical Design have joined the ranks of Crytek and shall now be known as Crytek UK. We'd like to welcome the guys to the team and hope for them to settle in well to the Crytek family. For all those of you who are speculating on what Crytek UK will be working on, that's still an unknown so you'll have to keep guessing. The official press release is below: 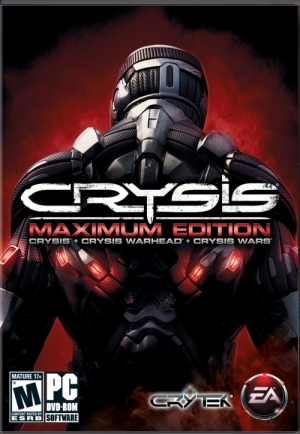 InCrysis Fan Art
Crysis fansite inCrysis. The team there have recently compiled a collection of various screenshots and works of ToD art that really stand out from the rest, be it due to artistic skills or near photorealism. A lot of our own forum members have produced work that is featured there, as well as many modders from different sites, so please congratulate them all for their amazing work.

Sample
This is merely a small taster of the full collection, which features art and screenshots from Crysis modders everywhere.


Cry-McGinge new Crytek Community Representative
We’re pleased to be able to announce that as of today March 1st, Sam ‘McGinge’ Howels has joined the team here at Crytek in the position of Community Representative. Sam’s main focus will be the Crymod portal. This means that Sam will now be an administrator on Crymod and will be in charge of the team that run it. It also means he’ll have regular contact with Cry-Eddy and other members of the Crytek team in order to put across the correct messages and information to the community, while giving your feedback to us.

I’d personally like to welcome Sam to the community team, and I’m more than cofident he’ll do a fantastic job. Welcome Sam!

We also have a message from him which is in quotes below.


Whats to come?
We at Crytek are well aware that the big thing on the communities mind right now is when is the editor going to be released, and as much as we'd like to be able to give out a date, right now we're still in testing and don't have one. However, in the run up to the release of the editor we're working on many things so that when the editor is made available you'll be able to get to grips with it straight away.

We're working on updated tutorials for you, and not just any, but the ones you specifically want to see. We're also working on slight redesigns for both Crymod and the CryWiki to make them a lot more accessible to you whilst also providing plenty more content, these changes are in the works and will be launched just before the editor. As for the SDK and Editor, there will be a video announcement in an upcoming note to the community which should also be available from MyCrysis.com in March.

So although we still don't have a release date for the editor yet, we've got plenty in the works for when it is released and an update about it sometime this month. So for those of you that are disappointed just hold tight a little bit longer and the editor will soon be here!