Greetings Community
For those who did not hear about it, below is the official press note on the $699 Warhead machine including all specs and link to the store.
When Crytek started the development of Crysis Warhead, their mission was not only to give gamers more of the action-packed, open-ended gameplay gamers latched onto in Crysis, but also to enhance CryENGINE2 to the point where Crysis Warhead would show a marked improvement in performance from the original game.

Mission accomplished.
And now with the launch of Crysis Warhead just a few days away, we’re proud to announce a partnership that will give PC gamers a similar experience as an option.  Ultra PC with feedback and consultation from Crytek and NVIDIA, will begin selling a pre-built system, the Ultra Optimized PC, featuring performance specs for only $699 at http://www.tigerdirect.com/go/crysis/ when Warhead ships on September 16th. This PC will be capable of running Crysis Warhead on Gamer visual settings at an average of 30 FPS.

“When we started developing Crysis Warhead, we gave the team at Crytek Hungary the challenge of optimizing CryENGINE2 to improve performance from Warhead without sacrificing any of the visual fidelity we pushed for in Crysis,” said Cevat Yerli, CEO of Crytek.  “We’re excited that we are going to be able to open up the Crysis universe to more gamers while also giving gamers who played the original game an even better experience this time around.”

“As gamers know, the GPU is the most important component for any gaming system,” said Ujesh Desai, general manager of desktop GeForce products at NVIDIA. “We’ve worked closely with Crytek to ensure that Crysis Warhead runs smoothly across a broad spectrum of GeForce solutions. The Ultra Optimized PC shows that gamers will have a great Crysis experience at an affordable price if they optimize their PC with the right GPU/CPU combination.” 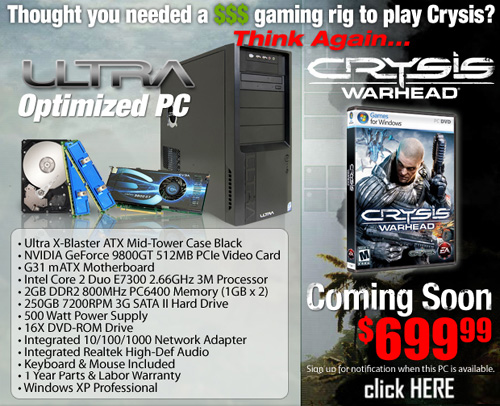