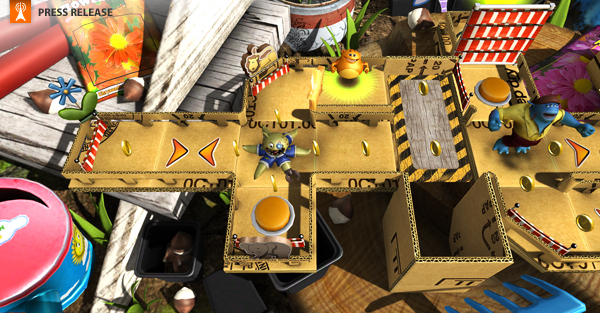 Players will soon be able to get their hands on Crytek’s Fibble – Flick ‘n’ Roll in an exciting new form on the new Kindle Fire HD from Amazon.

A dazzling physics-based puzzler, Fibble – Flick ‘n’ Roll will be available for Kindle Fire HD, inviting players to guide extraterrestrial explorer Fibble through colorful levels that will put their logic, skill and reflexes to the test. Two brand new areas feature in the Kindle Fire HD version of Fibble – Flick ‘n’ Roll, with the Holiday Hop and Summer Spin environments bringing the total number of levels on offer to 65.

“Providing players with new ways to experience our games is always an exciting opportunity,” said Nick Button-Brown, General Manager Games at Crytek. “The unique features of the Kindle Fire HD are ideally suited to showcasing all that Fibble has to offer, and we hope everyone who picks up the system will download the game and discover the joys of having Crytek quality at their fingertips.”

Fibble – Flick ‘n’ Roll will be available from the Amazon Appstore for $0.99/€0.79, and will also be compatible with Kindle Fire.