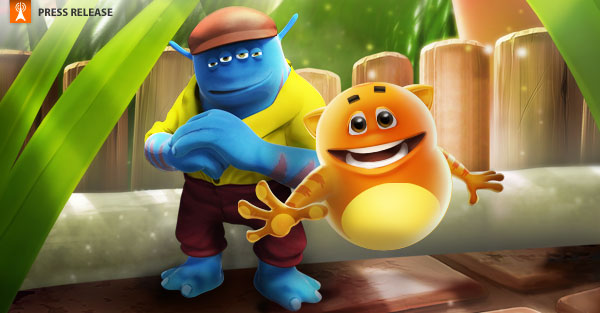 Crytek GmbH (Crytek) today announced the release of their first content and feature update to Fibble – Flick ‘n’ Roll on iPad, iPhone and iPod touch. The latest version of the game boasts many new features, including a new area to explore with eight challenging new levels. Additionally, Fibble and his crew members are reunited with Klonk, the forgotten friend they previously left behind! Klonk introduces alternative ways to play as the mission continues to help Fibble and company return home. Also, ‘lost files’ are revealed, which present nine new levels in the already-known areas of the suburban home.

Further improvements added to the gaming experience are the now available Fibble skins, which players can unlock by completing certain levels. With the newly integrated iCloud Support, players can now back-up their saved game to iCloud and re-install the game again without having to start from the beginning. Furthermore, new social media features have been integrated, allowing you to post new high-scores with witty texts to your favorite social media platforms - be it Twitter or Facebook.

“Upon the feedback we’ve had from our growing Fibble community, we decided to extend the adventure. We have seen that most gamers really enjoyed playing it and were wishing for more levels to try their hand at. We were only too happy to oblige, not just by adding a new area to explore, but also prolonging the gameplay of the former rooms.

Our main goal is to make Fibble a great gaming experience for our fans, and by taking their advice on board we hope to achieve this and plan to release further content updates in the future.” states Kristoffer Waardahl, Studio Manager of Crytek Budapest

After helping Fibble find his friends and navigating him across the rooms of a suburban home, your adventure continues. This time preferably with all of the crew members! When a hero is left behind and when it turns out the mission wasn’t accomplished, what can one do? The only way for Fibble to save the day is to return to earth and retrieve Klonk. You’ll have to find your way through the garden in order to get back to the spaceship, but be careful; it’s no stroll through the park!